Strijdom van der Merwe, the world renowned land artist and founding member of Site_Specific was the festival artist at Aardklop 2013. His exhibition, ‘Sculpting the Land’ was housed in the main gallery at North West University and the opening speech was delivered by Johan Myburg, the erudite and eloquent arts editor at Beeld newspaper. The exhibition visually documented Strijdom’s remarkable international career as a land artist. The centre-piece was a web of red twine connecting invisible points in space with maps of Potchefstroom etched by the whimsy of a wind-blown pen and representing the impermanence of land ownership and dispossession.

The Site_Specific land art exhibition at Aardklop was curated by Gordon Froud in the North-West University (NWU) Botanical Garden. The artists participating alongside him were Colleen Winter, Lungi Gqunta, Erynne Ewart-Phipps and Angelique Koekemoer. Colleen’s ‘Cycle: CROW’, consisting of numerous life-size frozen crows melting in the ephemerality of life and land art made for a spectacular event at the Art Safari opening tour. 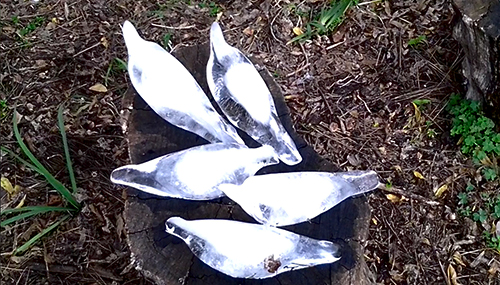 Colleen Winter, ‘Cycle:CROW’, detail from an installation of crows made out of melting ice. Aardklop 2013, NWU Botanical Garden.

Anni Snyman curated ‘Relocated’, an exhibition of the images from the artist’s book documenting the 2nd International Land Art Biennale which was organised by Site_Specific in Plettenberg Bay in August 2013. Clemengold, who announced their sponsorship of Site_Specific at that time, provided crates and crates of mandarins which were used to line the pathways of the garden and to create a giant Pacman-like figure in the centre of the gallery. 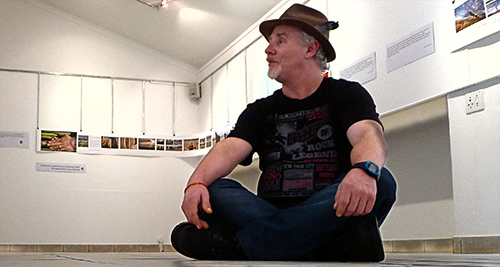 Chris Reinders sitting in the gallery of the Site_Specific exhibition ‘Relocated’ curated by Anni Snyman, a documentation of the 2013 Land Art Biennale in Plettenberg Bay in August of that year.