Boitumelo Sewing Project is the collective name of a group of crafters who live and work in the inner city of Hillbrow. Formed in February 2001 by the administration of an Outreach Project in Hillbrow, they have recently started to embark on outreach initiatives and workshops of their own - sharing their knowledge, skills and human experience with other communities throughout Africa. At Site_Specific the Boitumelo Project participated as artists, as well as facilitating and teaching craft development with 40 community crafters, they explored the possibilities of making products with found and natural objects and raised environmental consciousness with learners at six schools in the Bitou area.

When Pandora was presented to mankind (before she opened the urn to release war, famine, pestilence and hope) she was dressed in a beautiful silver gown with a veil made by the goddess Athena. The veil as a female attribute is almost universal across cultures - from being a bride to wearing the burka - ironically,  nature (and all things evil) is as often identified as female, and the issues facing many women are also issues that affect our natural environment.

Exploring what the word hope means to someone trying to make a living in one of the most dysfunctional suburbs in Johannesburg is a challenging task. Many of us have fled or walked to escape destitute realities and our journeys have brought us together in the urban jungle of Hillbrow. In recreating this veil of beauty (from before the fall) we carefully crochet and knit into it hidden desires and meanings from our own stories, captured in beautiful beads and charms. Thus the activity of making strings for ‘Veiled Hope’ creates openness and safety, hiding and clarity while we explore various cultural issues amongst ourselves. Made from material collected and shared from our different environments, the veil offers viewers the opportunity to also explore and weigh their own traditional communal values as well as modern individual Eurocentric perceptions. Using embroidery and craft, skills that the goddesses bestowed onto Pandora, it is hoped that this project would create opportunities and synergies between the experiences of women from all over Africa.

The first part of ‘Veiled Hope’ was created in Hillbrow and exhibited at the Church of Peace and at the Hillbrow Theatre Project in Kapteijn Street before traveling to be part of Site_Specific. Here we offered skills transfer workshops to the participants from ‘Women on the Move’ in the Craggs and a Bead Project from Kwanokuthula who added their beaded and crocheted strings - bringing the number of individuals that have contributed to the veil to 153. We installed the veil in a broken section of the Timbershed, where the veil’s fine translucent qualities juxtaposed against the rough solidity of the stone wall. It is our hope that this artwork will continue its journey to connect voices and initiate hope across the continent of Africa. 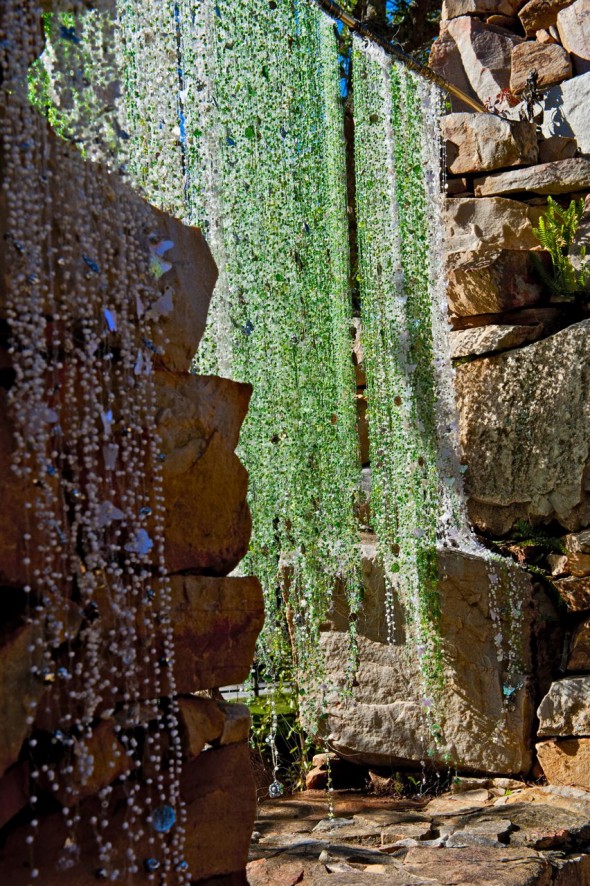 The Boitumelo Sewing Project and Erica Lüttich brought their experiences and skills to surrounding Plett communities in workshops designed to enable local communities to participate in the local craft market tourism trade. The following flag project was part of Site_Specific's 2011 event. 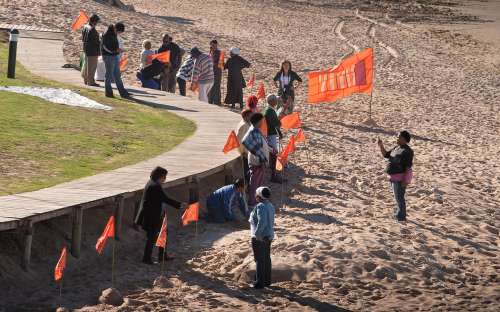 Crafters from the communities of Kurland, Group of Hope, New Horizon, Knysna, and Kwanokuthula put up their own flags on the beach in response to the Portuguese, Dutch, and British flags planted there during the colonial period. For some community members this was a first visit to this specific beach, despite growing up in the area. Photo by Elizabeth Olivier-Kahlau.